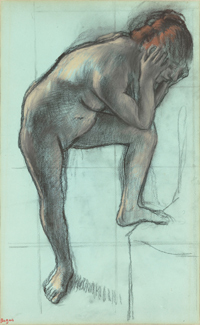 A gorgeous exhibition devoted to the artist’s nudes is on view  at the Boston Museum of Fine Arts.

The first museum exhibition devoted exclusively to the extraordinary range of nudes by Edgar Degas—tracing their evolution from the artist’s early years, through the private and public images of brothels and bathers in the 1870s and 1880s, to the post-Impressionist nudes of the end of his career is on view at the Museum of Fine Arts, Boston (MFA). This beautiful exhibition was also organized by the Musée d’Orsay in Paris, Degas and the Nude will be on view from October 9, 2011, through February 5, 2012. After its debut in the MFA’s Ann and Graham Gund Gallery, Degas and the Nude will be shown at the Musée d’Orsay in Paris from March 12– July 1, 2012.

This exhibit provides a groundbreaking examination of Degas’ concept of the human body over the course of 50 years by showing his work within the broader context of his forebears, contemporaries, and followers in 19th-century France, among them Ingres, Delacroix, Cassatt, Caillebotte, Renoir, Toulouse-Lautrec, Matisse, and Picasso. Assembled from the collections of more than 50 lenders from around the world, the approximately 165 works, 145 by Degas himself, include paintings, pastels, drawings, monotypes, etchings, lithographs, and sculptures, many of which have never before  been on view in the United States.

The 19th-century French artist Edgar Degas (1834–1917), was a founding member of the Impressionist group who gravitated toward realism. He is acclaimed for his mastery of a wide range of genres, which he executed in all media using a variety of techniques.  In addition to his famous depictions of ballet dancers and horse racing subjects, Degas’s work also included history paintings, portraits, landscapes, and scenes of urban leisure. This exhibition, however, will focus entirely on his nudes, illustrating the transformation of Degas’s treatment of the human form over the course of his career, from early life drawings in the 1850s, to overtly sexual imagery, to gritty realist nudes, and beyond to the lyrical and dynamic bodies of the last decade of his working life when the theme dominated all of his artistic production in all media.

“Degas and the Nude will be a revelation for visitors. It offers a number of surprises, including the reunion of several of Degas’s black-and-white monotypes with the corresponding pastel ‘twins’ for the first time since they left the artist’s studio,” notes Malcolm Rogers, Ann and Graham Gund Director of the MFA. “Visitors will see the progression of his nudes and the very heart of Degas’s fascination with the body and its range of emotion and movement. He pursued that fascination in portraits, and above all in images of dancers, but in the nude we see the body in its purest form…through Degas’s eye and imagination.”

Degas and the Nude draws from some of the finest collections in the world. In addition to the MFA and Musée d’Orsay, the single largest lender to this exhibition, with more than 60 works.  Other lenders  include the National Gallery and Courtauld Gallery, London; the Musée Andre Malraux, Le Havre; museums and private collections in Germany, Japan, and Switzerland; as well as the Metropolitan Museum of Art, the Art Institute of Chicago, and the Philadelphia Museum of Art, among many other museums and private collections in North America.

The exhibition features such masterpieces as Young Spartans Exercising  dating from 1860-62, from the National Gallery, in London and Scene of War in the Middle Ages, 1863–65, from the Musée d’Orsay, Paris, two of Degas’s greatest history paintings; and The Tub  from about 1886, also on loan from, Musée d’Orsay), a pastel completed at the height of his career and presented at the last Impressionist exhibition in 1886.

The exhibit also offers context to this exploration of the artist’s nudes by juxtaposing his works with those created by major artists who influenced or were influenced by Degas, including Ingres’s Angelica Saved by Ruggiero, 1819-39, from the National Gallery in London, Caillebotte’s Man at his Bath (1884, Private Collection), and Picasso’s Nude on a Red Background (1906, Musée de l’Orangerie, in Paris.

More than three years in the making, Degas and the Nude was originally conceived by George T.M. Shackelford, Chair, Art of Europe and Solomon Curator of Modern Art at the MFA, who co-organized the exhibition with Xavier Rey, Curator of Paintings at the Musée d’Orsay. “Our project explores how Degas exploited all of the body’s expressive possibilities,” Shackelford said. “It shows how his personal vision of the nude informed his notion of modernity, and how he abandoned the classical or historical form in favor of a figure seen in her own time and setting, whether engaged in shockingly carnal acts or just stepping out of an ordinary bath.”

“The first works by Degas to enter the collections of the French State were pastels of nudes bequeathed to the nation by Gustave Caillebotte in 1894,” observes Xavier Rey, exhibition co-curator. “In the ensuing century, the Musée d’Orsay has become

the world’s greatest repository of Degas’s depictions of the nude—in paintings, pastels, drawings, and sculpture. We take pride in co-organizing this major international project, which will be one of the important exhibitions in Paris in 2012.”

The exhibition begins with a selection of the artist’s first nudes, including Study of Michelangelo’s Bound Slave (1855–60, Private Collection), one of Degas’ many studies of works by Renaissance artists that he made in Paris or in Italy, where he drew from live models at Rome’s French Academy. Many life studies and paintings created as part of his early academic training  are on display, as well as drawings made for early figural compositions, culminating in the painting Young Spartans Exercising, a depiction of girls beckoning or taunting a group of boys, with the landscape of ancient Sparta as a background.

One of Degas’s most notable works incorporating nudes, the history painting Scene of War in the Middle Ages, is the focal point of the second section of the exhibition. This often overlooked masterpiece was the first work Degas exhibited at the official Salon in 1865. It offers an early view of some of the many poses the artist would repeat throughout his career.

Complementing it will be more than a dozen of the studies that preceded it, as well as works by other artists who exerted an influence on Degas in the conception and elaboration of the painting, such as Jean Auguste Dominique Ingres, Eugène Delacroix  and Francisco de Goya y Lucientes  and Pierre Puvis de Chavannes.

Other works by Degas from the later 1860s are also on view,  Interior (The Rape), 1868–69, from the Philadelphia Museum of Art and Peasant Girls Bathing in the Sea at Dusk  from about 1869.

The exhibition’s third section is devoted to the brothel monotypes that Degas executed in the latter half of the 1870’s, images that are at times caricature-like, ironic, pornographic, or even unexpectedly tender. These often sexually explicit scenes depict women in brothels: waiting for clients, as in The Reluctant Client from 1876-77, from the National Gallery of Canada, and engaging in sexual acts, as in Two Women, 1876–77, from the MFA. Most of these works are relatively small in scale, and were made as drawings using brush and greasy ink on metal plates, which were then printed to yield one proof a “mono-type”; sometimes a second, fainter, impression was taken. The monotypes were occasionally touched with pastel; some, more often the second impressions, were completely covered with color to become small pictures, ready for sale or gifts.

The evolution of Degas’s nudes continues in a following section, shifting from overtly sexual imagery to the everyday, “naturalist” nudes, the artist’s spontaneous views of ordinary, seemingly unposed women. at various stages of undress or performing “la toilette,” bathing, drying, or grooming themselves. These monotypes highlight the emergence of the bather as a central theme in Degas’s art, one that he would explore from the middle of the 1880s until the end of his career. Many of these later monotypes were made in a way that differed from the first ones, showing the artist’s interest in exploring a variety of techniques and materials. Rather than painting his image with a brush, Degas inked the entire plate and “pulled” the image out of the ink with selective wiping and scraping. In this section, some monotypes are united with their corresponding pastels for what is believed to be the first time. These include the monotype Woman in a Bathtub and the pastel over monotype Woman in Her Bath, Sponging her Leg. Other pastels and oil paintings are featured here, as well as comparisons to the work of Mary Stevenson Cassatt  and Henri de Toulouse-Lautrec. The section culminates in a group of large-scale oil paintings by Degas and his friends Gustave Caillbotte (1848–1894) and Henri Gervex (1852–1929), made between the years 1878 and about 1884.

Works from a pivotal time in Degas’s career, 1884–86, will be examined in section five of the exhibition. Two examples, The Tub) and Woman Dressing Herself  were included in the last Impressionist exhibition, held in Paris in the spring of 1886. In addition, comparative paintings by Pierre-Auguste Renoir and Puvis de Chavannes, are on display, as well as works from the late 1880s that expand upon those created a few years earlier. Also included is the sculpture The Tub, which was cast in bronze after the artist’s death.

Degas and the Nude concludes with an exploration of Degas’s last years as an artist, from about 1890 to 1905. “During this period, Degas is focused almost exclusively on the bather, with the exception of a few great drawings and sculptures depicting dancers. His color sense grows bolder, and as he nears the end of the 1890s, his painting and drawing technique become more experimental and, likewise, more bold,” explains Shackelford. “Influences of such artists as Gauguin and Rodin are felt in his painted compositions and sculpture. Sinuous lines, sensual hatchings, delicate blending and shading, and large scale mark his later charcoal drawings of bathers, among the most accomplished sheets in his career, and a radical departure from the carefully rendered nudes of 1855–1865.” Featured here is the largest single grouping in the exhibition, which showcases Degas’s masterpieces, After the Bath (about 1896, Philadelphia Museum of Art) and After the Bath (1895-1900, The Phillips Collection, Washington, DC). In addition, to illustrate Degas’s influence on the next generation of great artists, paintings by Degas are juxtaposed with those by Pierre Bonnard, Henry Matisse and Pablo Picasso. In the context of Degas’s great nudes of the 1890s, Bonnard’s Indolence (1899, Musée

This exhibition is both broad and deep, and casts the artist’s nudes in new context and importance. Presentation of the exhibition in Boston is made possible by Bank of America

(Degas and the Nude (MFA Publications, October 2011) is the first book in a generation to explore the artist’s treatment of the nude.. The 336-page book by co-curators George T.M. Shackelford, Chair, Art of Europe and Solomon Curator of Modern Art at the MFA, and Xavier Rey, Curator of Paintings, Musée d’Orsay, It has. more than 200 color images and presents a new look at Degas’s subject in paintings, pastels, drawings, prints, and sculptures. The price is $65 (hardcover) and $45 (softcover). 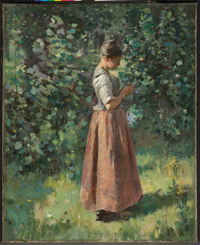