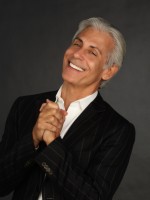 An all new public television documentary presented by Arizona PBS,

The film concerns the life and work of Steven Caras, a former New York City Ballet dancer, who transformed his career to become one of the world’s most renowned dance photographers of all time.

Currently a resident of West Palm Beach, Caras is also a published author, guest lecturer, ballet master and founding chairman of the Randolph A. Frank Prize for the Performing Arts.

Directed by Emmy Award winner Deborah Novak, Steven’s story begins at a time when men did not readily pursue a career in ballet without escaping unscathed. In spite of the bullying he endured, he persevered, receiving full scholarships to the Joffrey School and the School of American Ballet in New York City. At 18, with only three years of training, he was personally invited by the legendary choreographer George Balanchine* to join his company, the New York City Ballet.

Without question, this would change his life. During a 14-year period of dancing with NYCB,

Mr. Balanchine began to take note of Caras’ gift as a photographer, encouraged him to take this seriously, and granted him privileged access to photograph all aspects of City Ballet’s private world.

These now historic dance moments are but a few of the countless arresting images featured in the film.

Above all, STEVEN CARAS: SEE THEM DANCE

will feature the compelling story of this exceptional artist, giving viewers an intimate look at the ballet world through the eloquent narrative and unique perspective of a male dancer’s personal journey of challenges and heroic accomplishment.

The world premiere screening will take place at The Raymond F. Kravis Center for the Performing Arts in Persson Hall on February 24, 2011, at 7:30 p.m. Also that evening, both director Deborah Novak and Mr. Teachout, author of All in the Dances: A Brief Life of George Balanchine, will engage in a conversation with Mr. Caras onstage, talking about the process of documentary filmmaking from the very different vantage points of the director and the subject.

The film will have its New York premiere on March 7, 2011, at the New York Public Library for the Performing Arts at Lincoln Center where Jennifer Homans, author of Apollo’s Angels, will interview Mr. Caras immediately following the screening.

Two days later on March 9, 2011, Arizona PBS will premiere the film on air, and subsequently offer it to the entire PBS system.

Unless otherwise noted, All dance photographs:

*Balanchine™ is a Trademark of the George Balanchine Trust.